Ned and Elizabeth Roe Peterson headed west on horseback across the southeastern United States after the Civil War. When they finally reached Southern Brazos County about 100 miles Northwest of Houston near the Brazos River at the Brazos-Grimes County border in Central Texas, they bought land and established a homestead and farm site.

In 1993, the State of Texas commissioned an excavation and investigative study of the Ned and Elizabeth Peterson farm site and homestead, conducted by the Texas A&M University Center for Environmental Archaeology. The final report, edited by Shawn Carlson with contributions from Sue Winton Moss and Sunny Nash facilitated the nomination of the 19th Century Peterson farmstead in southern Brazos County to the National Register of Historic Places in Washington D.C.

The Briscoe Center at the University of Texas is the repository for much of the original historic material published in the report. As part of the team, Nash conducted oral history interviews, restored and reproduced historic family pictures and papers, and collected genealogical data and ancestral memorabilia, such as obituaries, military records, deeds, marriage licenses and letters, some of which are part of The Peterson Legacy, housed at the Carnegie History Center in Bryan, Texas.

Shawn Bonath Carlson is the collections and exhibits curator at Star of the Republic Museum at Washington on the Brazos. She won the 2012 John L. Nau III Award of Excellence recognizing her efforts to identify the descendants of the signers of the Texas Declaration of Independence.

Sue Winton Moss is an Austin-based historian, who won the 2008 Abner Cook Award for Interpretive Planning from the Neil-Cochran House Museum in Austin. Sunny Nash received the 2014-15 Ottis Lock Endowment Award and Research Grant to complete her photographic and oral history study, The Peterson Legacy, an exhibition of photographs and artifacts, resulting from the study.


African Americans on the Western Frontier

African Americans have been on the Western Frontier since there was a Western Frontier, according to The African-American West: A Century of Short Stories co-edited by Bruce A. Glasrud, award-winning writer-editor and Professor Emeritus of History, California State University, East Bay, with Laurie Champion. The book includes Sunny Nash's story, Amen, about a religious healing meeting, typical of those held in frontier communities. The African American West had black cowboys as notorious as any that herded cattle to market, sang country-western songs on the Chisholm Trail and helped to shape the frontier landscape.

By 1864, Ned Peterson had mounted his horse and left Virginia, which could mean self-purchased freedom, voluntary surrender by his owner, forgery or running away. Many slaves, hearing rumors of coming freedom, left without confirmation. Like other Texas pioneers, Ned probably traveled by horseback, wagon and foot down the Atlantic Coast and around the Gulf states. Longer than the direct route, the coast’s milder climate and big cities provided temporary work. When Ned reached Alabama, he met Elizabeth Roe, who would become his wife. Ned and Elizabeth’s great-granddaughter, Billie Stewart Smedley, said she heard family stories that her great-grandmother, Elizabeth, may have been an American Indian or a descendant of African and Native American ancestors. Either way, Elizabeth was probably raised as a slave in Alabama.

The story of the Petersons, From Excavation to Oral History by Sunny Nash, appeared  in the November/December 2002 issue of Ancestry.com (Magazine). 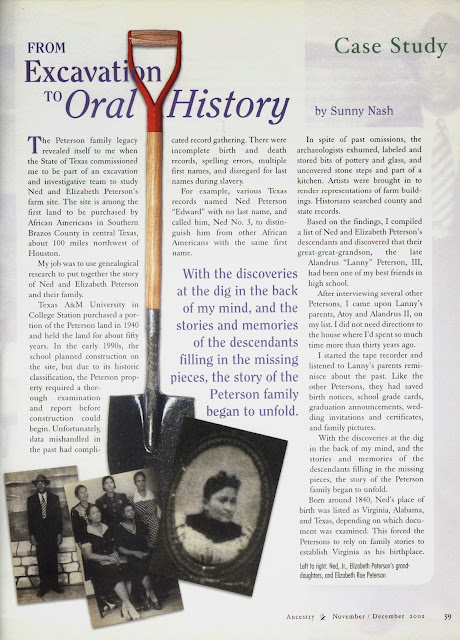 Texas A&M University in College Station purchased a portion of the Peterson land in 1940, held the land for about 50 years and, in the early 1990s, planned construction. Because of historic classification, the Peterson property required a thorough examination and a published report before construction could begin. My contribution to the examination was to conduct oral history interviews, photograph artifacts and and reproduce family photographs and documents.


In the past, mishandled data regarding African Americans complicated record gathering.

There were incomplete birth, death and marriage records, careless spelling of names, multiple first names and disregard for last names during slavery.


For example, various Texas records named Ned Peterson, Edward with no last name, and called him, Ned No. 3, to distinguish him from other African Americans with the same first name. In spite of past omissions, archaeologists exhumed, labeled and stored bits of China dishes, pottery, colored glass and jewelry, and uncovered stone steps, window glass and part of a kitchen while artists rendered representations of farm buildings. Historians searched county and state records for marriage, childbirth, landownership, voting, purchase, livestock and crop production, credit and death records.

The apparel of this young family helps to date this photograph to the late nineteenth century; reproduced by Sunny Nash.

Promote Your Page Too